WIR SIND IHR | THEY ARE US | ΕΙΝΑΙ ΕΜΕΙΣ 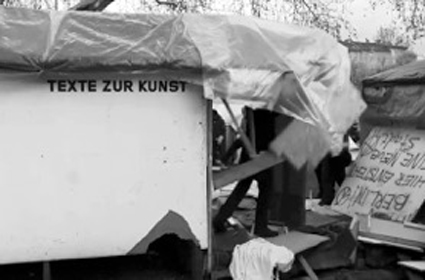 WIR SIND IHR | THEY ARE US | ΕΙΝΑΙ ΕΜΕΙΣ

Conversation will be held in English

Free Entrance with a first-come-first-served basis

A conversation with Caroline Busta, editor-in-chief, and Anke Dyes, editor of TEXTE ZUR KUNST around the forthcoming TZK issue, titled “They are us”.

From its first issue in 1990, TZK addressed aesthetic developments in tandem with political change. We now take issue #105 “Wir sind ihr / They are us” to more closely consider the nationalist, conservative, and racist ideologies that have recently become markedly more visible across Europe and in the United States. At the core of this issue – which has been advised by Helmut Draxler, Isabelle Graw, and Susanne Leeb – are various forms of movement, migration and border politics (of humans, of data, of patrimony, of semiotic meaning), and the tipping point beyond which liberal institutions are incapable of arbitrating “truth.” Conceived prior to the US presidential election, and produced amid the chaos of the new administration’s first weeks, this issue resists the mode of immediate mediation (à la Twitter and the daily news it metabolizes), instead indulging what distinguishes the bound printed page from the digital feed: providing a cooler, more metered reflection of the moment we’re currently experiencing, an analysis of political-aesthetic thinking at a time so seemingly accelerated that the very terms and events used to discursively engage are shifting meaning literally overnight.

Organized by the Goethe-Institut Athen in collaboration with Radio Athènes, institute of contemporary art, as part of ‘apropos documenta’ a lateral project of film screenings, historical material, readings, conversations, live performances and the creation of a productive archive.